Posted on September 3, 2012 by dreamlandmargate

Once the transfer of ownership has concluded, this decision releases the funding secured to enable us to deliver Stage one ready for the 2014 season. Building up to 2014 is the exciting pre-opening period between Easter 2013 and Easter 2014 where we will bring a number of attractions to Dreamland Margate and welcome visitors and the local community take part in our programme of events, activities, learning and participation.

In the meantime we are working towards progressing the designs and interpretation to the final stages and looking forward to the start of the restoration work on the historic rides collection and the continued building of the Dreamland Archive.

This month sees the installation of the windows to the North East elevation of the Cinema, which are bespoke to Dreamland’s Grade II* listed building and were installed under Thanet District Council’s urgent works notice. Other urgent works, now complete, include new roof, repointing, the restoration of the rotunda window and reinstatement of the iconic fin sign.

In spite of delays, spirits are high and support remains strong.  We would like to thank our project partners, Thanet Disctrict Council, for their dedication, commitment and belief in the project demonstrated both by the acquisition of the land to bring the park back into use and the urgent works to safeguard the cinema building for future generations to enjoy.

A MESSAGE FROM OUR CHAIR

The Dreamland Trust is delighted that the Secretary of State has backed our plans to reopen Dreamland as a major seaside visitor attraction of regional and national significance. Along with our partners, Thanet District Council, we were confident that our plans would be found to be robust, deliverable and in the public interest.

The Trust was very pleased to support the council in its efforts to secure the site to enable us to implement our vision, which has been shown time and time again to be the development that the people of Thanet most want to see happen. I am very grateful to the council for believing in our project and putting its time and resources behind it. We have built a really great partnership on this project, and I am looking forward to working with TDC as we now move towards implementation.

The residents and businesses of Thanet, and its many existing and future visitors, have waited far too long for work on this project to start. The funding has largely been in place since 2009, and plans have been drawn up since around the same time. The news that the CPO has been confirmed by the Secretary of State is hopefully the final major hurdle that we will have to cross before we start work on site. This decision means that the entire Dreamland site can remain intact, covering essentially the same area of land it has done since it opened as Hall-by-the-Sea in the 1870s. Britain’s oldest surviving seaside amusement park site will be a place of activity and excitement again.

The Dreamland Trust is ready to make a start on site and we hope to have Stage One of the project open by Easter 2014. When we open, Dreamland will include the Stage One rides and attractions (not all of which have been publicly announced yet – so watch his space), an events area and car park, which between them will utilise the whole site. Jan Leandro will be bringing forward a programme of events for next year, which should give people a taster of what is to come.

All of us here at The Dreamland Trust are looking forward to getting onto site and making this project happen. 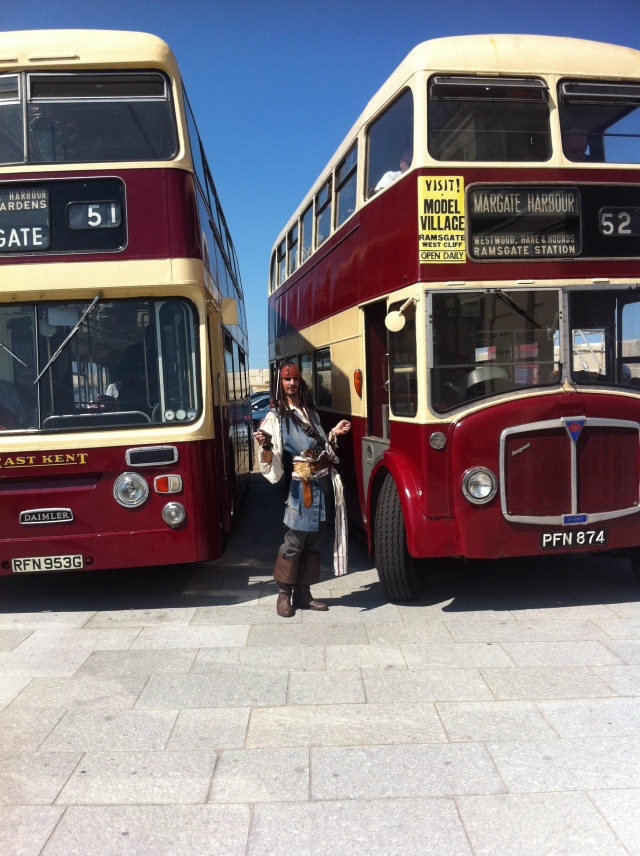 The day after the CPO announcement The Dreamland Trust celebrated in heritage style with the M&D and East Kent Bus Club, the Mayor of Margate, Leader of the council, Cllr. Clive Hart, Cllr. Iris Johnston and Captain Jack Sparrow.

Three of Thanet’s classic buses broke free from their 60th anniversary Kent wide tour to congratulate us outside the recently cleaned and unveiled Dreamland Cinema building and for a unique photo opportnity followed by an open-top bus tour along the seafront to the Harbour Arm before the bus club set off again to rejoin the tour.

What a fabulous bunch of guys, turning up in their vintage uniforms and posing for the cameras accompanied by the On the Buses theme tune, in my head – I fully expected to see Reg Varnie through the cab window – such fun!

A big thank you to all those who turned out and to the Thanet Hackney Carriage Association for loaning us their taxi rank.

Animate and Create’s 5 short animations, made by Thanet’s young people through the Heritage Lottery Fund’s Young Roots strand, will be screened at Hartsdown Technology College on the 18 September 2012.  The films, themed on Dreamland’s Grade II* listed Scenic Railway, ‘Lord’ George Sanger,  youth culture heritage, the Grade II* listed Dreamland Cinema and personal memories, were made earlier this year. We understand they will feature in the Kent Cultural Baton at this year’s 6th Whitstable Bienalle 1-16 September.  Full details can be found at http://www.whitstablebiennale.com/.

The Dreamland Trust has been invited to attend the celebrations to mark the completion of conservation works at Margate’s Grade I listed Shell Grotto, owned by Trust Director Sarah Vickery. Nick Dermott, of TDC, has nominated the works for a prestigious English Heritage Angel Award and they’ve made it through to the Finals; you can vote for the Grotto here http://www.english-heritage.org.uk/caring/heritage-at-risk/English-Heritage-Angel-Awards/vote2012/.

ON THE WORLD-WIDE RADAR

Last month we welcomed a group of international London Olympic Games journalists to Margate, organised by Visit England with Visit Kent.  First stop was the Turner Contemporary gallery then onto the Walpole Bay Hotel and Museum for lunch and a Dreamland presentation before a trip to the Shell Grotto, the Tudor House and Margate’s Old Town. Journalists will be following our progress with some returning to Margate to learn more about the project in the near future.

SEASON OF MISTS AND MELLOW FRUITFULNESS

As summer draws to an end we are busy working with event partners, Beeping Bush and The Film Factory CIC, to put the final touches to a new event for Margate – a Halloween Horror Weekend.  The event is a celebration of Dreamland’s cinematic heritage and the marking of the 10th anniversary of the 2 Days Later film competition (now open for submissions http://www.2dayslater.co.uk/).

The programme includes a drive-in movie screening of Zombieland with a short film support programme, 2 Days Later film competition, screening and award ceremony, special matinee screening of the newly released HD restored 1957 Hammer classic, The Curse of Frankenstein, plus a screen talk on the History of the Horror Movie Genre by the legendary British film studio.  There will also be a Dreamland Cinema photographic exhibition, family halloween screening, ghost story telling and more.  Full programme details will be posted on our website News and Events page shortly.

A big THANK YOU for all your messages of congratulations, kind words of support and contributions toward getting the Dreamland Margate project to this stage – onwards and upwards!

We are looking for volunteers to invigilate the Dreamland Cinema photographic exhibition in the Harbour Arm Gallery, Margate Thursday 26 October – Sunday 4 November inlcusive between 10am – 5pm daily. We can offer free tickets to the Halloween Horror Weekend events and re-imburse travel expenses within Thanet.  Please do drop me an email at jan@dreamlandmargate.com if you would like to take part.

This entry was posted in Uncategorized. Bookmark the permalink.